El Alsson School is proud to turn 40 years this academic year.  El Alsson began by teaching the Egyptian National Curriculum from 1982 until 1992, then in response to numerous requests by parents for an alternative style of education to the Ministry’s National programme, the ‘English Academy International’ as it was called at the time was opened offering the British curriculum leading to IGCSE, AS and A-Level.

In 2002, El Alsson International School was approved as a centre for Edexcel GCSE, A/S and A-Level programmes as an alternative to the examination-based, cramming-style IGCSE system. For all of our students, El Alsson has been able to provide an interesting and demanding curriculum with a wide range of subjects available, taught by experienced UK teachers. In 2006 the American Section was introduced and a year later, accredited. We then became El Alsson British and American International School.

In 2017 El Alsson Haraneya moved to New Giza becoming El Alsson British and American International Schools – New Giza. We moved to a new state of the art campus built over 14 fedaans in one of the most prestigious communities in Cairo.

Looking back at the past 40 years we are proud of what El Alsson has achieved in the field of education, proud that it has always tried to be ahead of the game in embracing new educational developments and trends, and proud that it has strived to graduate citizens who are well equipped to succeed in the international market. We are extremely proud of all our alumni body, many of whom have exceeded in all walks of life. 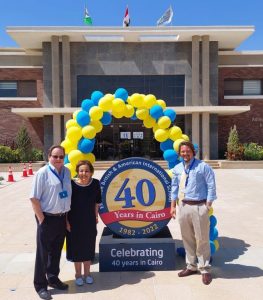 We are ever so grateful to all the parents, students, teachers, administrators, matrons, workers, bus drivers, gardeners and stakeholders who were part of this journey and made it with us so far. We couldn’t have done it without any of you.

Thank you and Happy 40th anniversary to El Alsson Community.